A Bolt that Bends - AFT Fasteners

A Bolt that Bends

Ask any fastener expert if a bolt can bend, and you will probably get an unequivocal “No, their strength is due to their rigidity.” However, one engineering professor at California Polytechnic State University has turned that notion on its head. Working with students on a class project in 2000, Saeed Niku conceived of the idea of a “Flexible Fastener,” a bolt designed to bend. His students then created prototypes of the unique fastener. 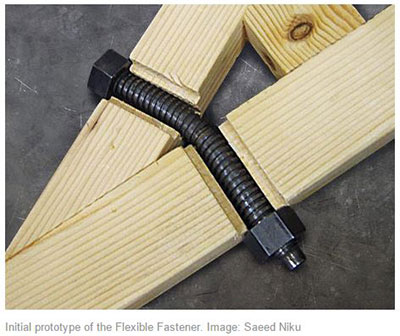 The bolt’s design is centered on a flexible shank made up of one of several strong, yet flexible materials, such as Kevlar or steel cable. Steel coiled like a spring wraps around the core and creates the threads of the bolt. This construction results in a bolt that can carry axial loads and thus be tightened just like any other bolt. However, unlike other bolts, it is laterally compliant, giving it the ability to bend or move in shear when necessary. The amount of flexibility in the bolt is flexible as well, depending on the core material used and how tightly the threads are wrapped around the shank.

The potential applications are many and would impact a variety of industries. For example, in construction, the bolt could be utilized to create earthquake-resistant structures or in situations where holes do not line up. The medical field could include the fastener in artificial knees where bending between moving parts is essential for fluid range of motion. According to Niku, the fastener can be used for “anything, basically, that is not parallel or aligned or needs to move sideways.” 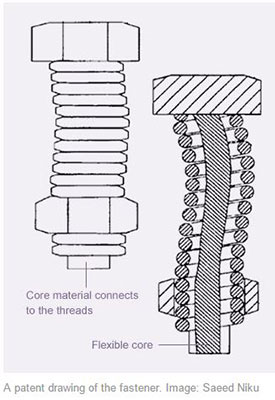 After the class project ended, Niku refined his design and the university was awarded patents in both 2005 and 2007. Currently, the "Flexible Fastener" is awaiting a licensing deal with a manufacturing partner that is “willing to invest the time and tooling to find out exactly what the optimum manufacturing would be.”

Stay tuned…A bolt that bends could become a reality one day soon.