Taps and dies are metal threading tools that work hand in hand. Taps form threads inside a hole while dies carve external threads on a round rod, but both are also used for rethreading when threads have been stripped or for cleaning up existing threads after a plating process. Taps can either be powered by machining equipment or by hand with a tap wrench. Cutting tool lubricants should be used in conjunction with taps to improve the quality of the threads and to extend tool life. You’ll find a large variety of high-quality, made in America taps from Norseman Drill & Tool on AFT’s website. Choose your type, finish, shank style and thread style by using the filtering menus to the left. 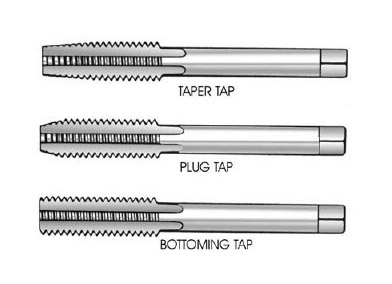 There are three types of taps. The most common, plug taps, have a steep taper at the point which helps the tap to start in an untapped hole. The sharply tapered point also allows full depth threads to be formed after only a few rotations. Because of this, much care must be taken when tapping a hole by hand to make sure that the tap is perpendicular to the surface. Even a slight angle at the beginning of the thread will magnify as the tap is formed.

Taper taps feature a point that tapers gradually allowing for a gentler start to thread forming, a feature that is useful in hard materials and when the tap diameter is small and thus more likely to snap when under much pressure. Another benefit of taper taps is that their gently sloping point is more forgiving when taping a hole by hand than the plug tap, making it easier to correct a slightly angled start.

Bottoming taps have almost no taper and have continuous cutting edges until the end of the tap which allows it to cut threads to the bottom of a blind hole, or a hole that does not go completely through the material. Because they do not have a tapered point, they cannot begin a new tap. They must be used in a hole that has already been partially tapped, usually by either a plug or taper tap. When used in conjunction with a plug tap, the bottoming tap finishes the threading process.

Taps are often sold in sets that include all three styles of taps, so that all three can be utilized to create a well-formed tapped hole all the way to the bottom.